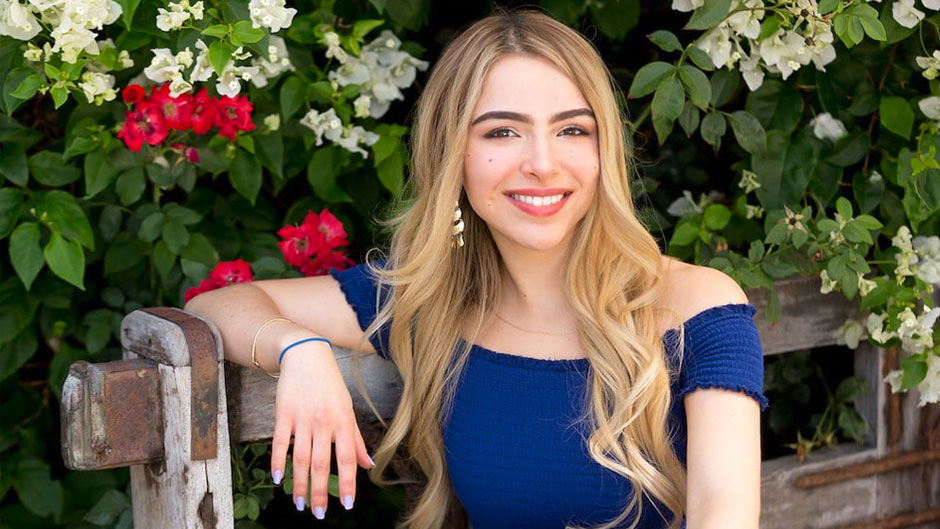 This article was originally published on University of Miami’s News&TheU in September of 2020.

Sierra Domb uses her communications skills to raise awareness of and funding for studies on a sensory-altering neurological condition.

Sierra Domb was a typical college student who enjoyed hanging out with friends, taking scenic drives around Miami, and being independent. That all changed one day during the fall 2015 semester when her vision suddenly began to blur while jotting down notes in class,  and the brightness of the room made keeping her eyes open unbearable.

“Naturally, I thought I was going blind,” said Domb, a senior majoring in communication studies in the University of Miami School of Communication. “I went through 18 months of intrusive testing with a number of eye doctors and specialists, and was eventually told that my eyes were completely fine.”

And in that moment, Domb said she knew she had to become her own advocate because “something wasn’t right” despite the normal test results.

After scouring the internet for answers, Domb suspected she was living with a neurological condition called Visual Snow Syndrome (VSS), which impacts an individual’s vision, hearing, and quality of life. Patients with visual symptoms see flashing lights, flickering dots, and static 24 hours a day. VSS also affects some patients non-visually, causing ringing, humming, or buzzing, depersonalization, debilitating migraines, and more. The symptoms do not go away.

“It’s challenging to do everyday tasks,” said Domb. “The symptoms are even there when I close my eyes, so sleep is often evasive. I make an active effort every day to overcome this medical condition by manifesting optimism. My family is also very supportive.”

Following her online search, Domb contacted a doctor in London who published a VSS research paper in a medical journal and was able to be formally diagnosed. Her determination to find more information about VSS led her to create  the Visual Snow Initiative, whose mission is “educate, collaborate, and cure.” The organization offers hope, resources, and understanding for those affected by VSS.

“I was determined to not let Visual Snow stop me from pursuing my academic goals, but eventually I had to take some time off to readjust and cope with the diagnosis,” said Domb, who has returned to the University to complete her studies.

In 2018 she hosted the first conference dedicated to VSS after recognizing the imperative to do more for the under-observed condition. Since then, Domb has been contacted by people of all ages around the world  who are grateful and hopeful that there could be tangible solutions in the future.

“I have such a passion for communicating, so in a way, I feel like if it were going to happen to someone, I am glad it happened to me because I am in a position to help others understand VSS better,” said Domb, a Miami native. “I can take the sometimes-complicated medical jargon and explain it to others in simpler terms.”

Since the 2018 conference, the Visual Snow Initiative has garnered support from celebrities and entertainers, as well as leading professors and philanthropists.

“The stories that I have heard empower me to keep going,” said Domb. “I am humbled by the support the cause has received.”

Currently there is no cure for the condition. Domb said half the battle is getting people to know that VSS exists. It often goes undiagnosed because there is no problem with the structural integrity of the eyes.

“It is a result of a processing glitch that originates in the brain,” said Domb. “This results in seeing the distorted images and other related symptoms.”

Domb’s organization is working on connecting today’s technology with an international team of doctors, researchers, and scientists. While answers are being sought, she wants others to know that if diagnosed, you can live a fulfilling life without fear.